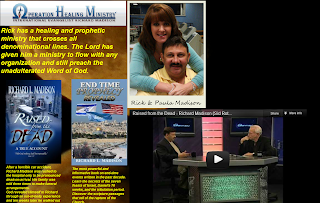 http://www.rickmadison.com/rick-madison-books
Raised from the Dead
After a horrible car accident, Richard Madison was rushed to the hospital only to be pronounced dead-on-arrival. His family was told three times to make funeral arrangements.
God revealed Himself to Richard through an out-of-body experience and ten weeks later he walked out of a wheelchair. He is now a walking miracle testimony to thousands of people throughout the world that God’s love can powerfully restore even the most hopeless lives.
As you read this true story, you will discover how you can…
End Time Prophecy Revealed

The most powerful and informative book on end-time events written in the past decade. Learn the secrets of the seven feasts of Israel, Daniel’s 70 weeks, and the tribulation period. Discover the scripture passages that tell of the rapture of the Church. Will there be a catching away before, during, or after the tribulation? Learn what event begins the last seven years known as the tribulation period. Also includes recent information on how the United Nations, the Antichrist, and the banking industry will usher in the new world order. Startling evidence that Israel may begin animal sacrifices again.
Discover the significance of the recent birth of the red heifer in Israel, and the development of the micro-chip implants. The unveiling of the two witnesses, the false prophet, and the next Middle East war. Includes the Jerusalem Covenant Document signed in 1993.
A must for anyone interested in escatology and future prophetic events. We are living in the last generation before the soon return of Jesus Christ. A great book to give your unsaved family and friends. It reveals that Jesus is coming soon.