Alex Jones Detained By TSA / Bank Of America Freezes Gun Manufacturers Account “We Believe You Should Not Be Selling Guns On The Internet” / '1776 WILL COMMENCE AGAIN IF YOU TRY TO TAKE OUR FIREARMS'... / BREAKING NEWS: Iran Pastor Nadarkhani Freed ( AGAIN ) From Jail; Others Remain Detained / Are the Los Roques islands the new Bermuda Triangle? / Distress Of Nations: Britain warns of more riots, as civil unrest sweeps across Ireland, Bangladesh, and India / El Presidente Obama? Dem congressman wants unlimited terms for Obama / US 'seriously' considering $1 trillion coin to pay off debt / U.S. downgrade expected without grand bargain in next two months / Asteroid Apophis, which may hit Earth in 2036, will pass close by this week / John McAfee claims he used female 'operatives' to spy on high level officials in Belize / Another supervolcano inflating: Significant uplift reported at Italy’s Campi Flegrei / DHS Insider Report: Coming This Spring: “Life for the Average American is Going to Change Significantly”

Are vaccines causing RSV and other diseases?

We vaccinate our infants thinking we are protecting them from deadly diseases. Yet, when we vaccinate them, we weaken their immune systems. This leads to poorer health and a greater risk of contracting…
/
http://drudgereport.com/

After President Assad’s speech, people in tens of thousands took to the streets in different cities across the country to show their support for the president’s policies. In Homs, people in various districts,…
/
Comments

Iran on Monday, January 7, released Iranian Pastor Youcef Nadarkhani, who was jailed on Christmas Day to serve the remainder of a sentence for evangelism among Muslims, his evangelical house church movement confirmed. ”His…
/

Officials searched Monday for bodies among the charred ruins of more than 100 homes and other buildings destroyed by wildfires in the Australian island state of Tasmania. Around 100 residents remained unaccounted for, three…
/

Are the Los Roques islands the new Bermuda Triangle?

The as-yet-unexplained disappearance last Friday of the plane carrying six passengers and crew, including Italian fashion mogul Vittorio Missoni, has prompted some to blame the “Los Roques curse.” The label has been attached
/

Hassan Aqajani, an adviser to the health minister, made the announcement on state television, and said the Tehran residents died in a year-long period since March 2011. High air pollution is a constant…
/
http://endtimeheadlines.wordpress.com/
/

The Head of the International Committee of the Red Cross has warned that Britain could face further riots as a result of the economic crisis. Yves Daccord also said he believes there is…
/

New York Democratic Rep. Jose Serrano is once again proposing a constitutional amendment to end presidential term limits – hoping to break his losing streak on the resolution that dates back roughly 15 years. However, the 12-term congressman likely faces long odds, as before, considering the resolution has no sponsors, never got a vote last year in the Republican-controlled House, needs two-thirds support in both chambers and ratification from roughly 75 percent of state legislatures. The joint resolution would repeal the 22nd Amendment to the Constitution. Supporters of the idea say the Constitution keeps Americans from re-electing their most successful leaders. However, Serrano re-introducing the proposal has ignited a firestorm on social media, with critics suggesting it is un-American. Serrano, who represents...
/

US 'seriously' considering $1 trillion coin to pay off debt

Speaking to the BBC's Today programme, Mr Roche, founder of Orcam Financial Group and blogger at Pragmatic Capitalism, said the idea was being taken "somewhat seriously" in Washington. "I know it’s been spoken about at the White House and a number of prominent people, including congressman, are talking about it," he said. In theory the US Treasury would mint the coin and deposit it into its own account at the Federal Reserve, which would allow the government to write down or cancel $1 trillion of its $16.4 trillion debt pile. The Treasury...
/
http://www.trunews.com/
/

U.S. downgrade expected without grand bargain in next two months

While the fiscal cliff deal brought a big sigh of relief to the market, particularly for risk assets, the compromise does nothing to address the long-term budget problems facing the United States. In fact, the Congressional Budget Office’s math suggests the bill increases the budget deficit by US$4-billion over the next 10 years. Most of this comes from lower revenues, but there is also another US$330-billion in spending increases through 2022. “The fact that Republicans were willing to take a deal with no net spending reductions suggests to...
/


Why Euro Zone Crisis May Get Worse This Year

It was Milton Friedman, not Ben Bernanke, who first made reference to dropping money from helicopters in order to prevent deflation. Bernanke’s now famous “helicopter speech” in 2002, however, was no less enthusiastically supportive of the concept. In it, he boldly previewed the almost unimaginable policy...
/


Peter Schiff: Get Real Money, Gold and Silver – as the Fed Will Not Stop Printing Money

Asteroid Apophis, which may hit Earth in 2036, will pass close by this week

99942 Apophis - named after the Egyptian demonic serpent-spirit of destruction - blasted itself into public awareness back in 2004 when astronomers calculated a 1 in 45 chance of it hitting the Earth on 13 April 2029. New data and fresh calculations have all but ruled out the risk for 2029 - but exposed a small chance that the asteroid could get alarmingly close in 2036. The 390m lump of space rock will be close enough to be seen in the night sky after it has passed its closest point at 14.5 million kilometres later this week. Astronomers are not sure about...
/

One of the most senior Catholic figures in Britain has launched a renewed assault on plans to allow gay people to marry, calling same-sex unions "morally defective". Former Archbishop of Glasgow Mario Conti, who now holds a symbolic position as an Archbishop Emeritus, published a letter in the Catholic magazine The Tablet outlining his opposition to gay marriage. In it he warned politicians not to equate "homosexual unions with heterosexual marriage". He wrote: "While it is true, certainly within Catholic social teaching, that governments are not...
---Pentagon Agrees to Full Discharge Pay for Gay Troops
/

Egypt's pope urged his congregation to be joyful and 'not be afraid' in his Mass for Coptic Christmas as he attempted to reassure a community anxious about the rise of Islamists to power. Pope Tawadros II's words came before the Egyptian military revealed it foiled an attempted car bombing which was likely targeting an abandoned church or a nearby military camp under construction along the Egypt-Gaza border. Tawadros also prayed for peace and stability for Egypt when he led his first Christmas Midnight Mass late on Sunday night...
/


Netanyahu says he will ‘never divide Jerusalem,’ could accept a centrist coalition

The sci-fi TV show Fringe often shows us an alternate, more technologically advanced version of Earth where airships are, for some reason, the norm. Now reality is mirroring fiction as a new project being developed in conjunction with the Pentagon is looking to bring airships back from their spotty past and into the future. Developed by Aeroscraft, the 230-foot-long prototype airship called the Pelican is designed to lift up to 10 tons of cargo across long distances, using a fraction of the fuel needed by an airplane. The airship, which, interestingly, looks a...
/

Are We Ready for a World in Which Everyone Spies on Everyone Else?

Recent events have me rethinking the benefits of a fully transparent world, in which everyone electronically monitors everyone else. In 2010, I blogged about my hopes that “grassroots spying” could help us create a safer, more just society, in which citizens can spy on people in power rather than just vice versa. “Privacy is a small price to pay for peace and justice,” I wrote, “especially since we’re headed toward radical transparency anyway.” But the effects of greater transparency will be unpredictable, to say the least. Consider this incident, which I...
/


Massive outburst in neighbor galaxy surprises astronomers. Is the Milky Way next?

Posted on January 8, 2013by The Extinction Protocol

Posted on January 8, 2013by The Extinction Protocol

Posted on January 7, 2013by The Extinction Protocol

Posted on January 7, 2013by The Extinction Protocol 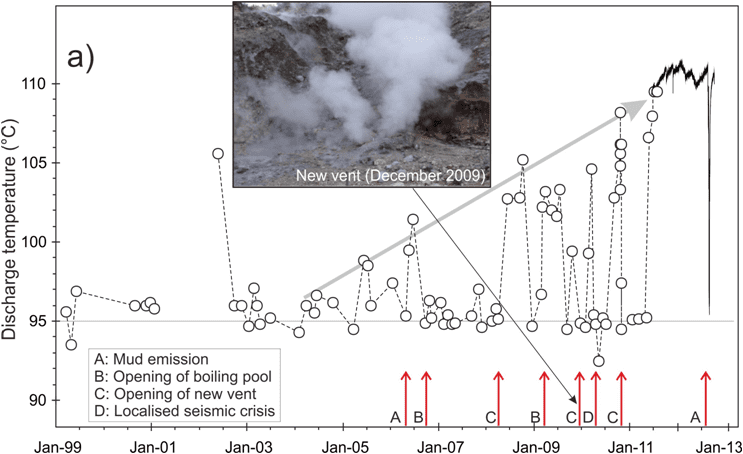 January 7, 2013 – ITALY - According to a recent report by INGV Naples, the ground deformation of the Campi Flegrei (Phlegraean Fields) near Naples has increased considerably lately. During the last 12 months, the ground in some places near the town of Pozzuoli was uplifted by about 8 cm. The largest uplift, recorded by GPS devices, occurred during the months of July-August 2012 and since December. The trend appears to be continuing at the moment. Such (sometimes dra

matic, totaling up to several meters in a few years) ground uplift and subsidence have been known in the Phlegraean Fields since antiquity and are not a new phenomenon. They can usually be explained by normal pressure, temperature and density variations of the giant hydrothermal system of the Campi Flegrei caldera and may not necessarily indicate an imminent eruption. However, in addition to the detected ground deformation, scientists also measured increased numbers of micro earthquakes, a rise in temperature and in particular, an increase in the proportion of the gases of magmatic origin at fumaroles in the Solfatara crater. As the hydrothermal system is closely connected with the underlying complex magma chamber of the Phlegrean Fields, new magma movements could in fact be the culprit for the observed changes. Whether these, and if so when, will lead to a new volcanic eruption is currently uncertain

. A much larger increase of such observed changes should probably be expected if in fact should new volcanic activity was to announce itself. The last volcanic eruption occurred after a rest period of about 3000 years in the year 1538 AD and built a new cinder cone, the Monte Nuovo (“New Mountain”) near Pozzuoli. Strong ground uplift, earthquakes and changes in springs and fumaroles preceded the eruption according to historical sources. Even though it was – geologically speaking – a rather small eruption, the effects of a similar event today would be devastating for the very densely populated area. It should be hoped that the residents and all involved are spared such a scenario, at least for the near future. –Volcano Discovery