FLASHBACK: Obama takes arranged query from HUFFPO during press conference...
White House Asks for E-Mails to 'Participate' in Michelle O's China Trip...
'Fear of coverage'...
/
Celente - The World’s Most Terrifying Nightmare :Could you imagine nuclear plants being sabotaged? All of the sudden their systems break down, and they go into meltdown. These are realities. This could be easily done.
/
Jim Sinclair: Russia Could Cause Gold To Hit $2000 In 2014
/ /
RUSH: Putin Sings ‘Come Back Barry, When You Grow A Pair’ – SPOOF

Russian troop movements raise concern of Ukraine invasion The buildup of Russian troops along the Ukrainian border is large and getting larger, and it is raising serious concerns that Russia could invade Ukraine proper. Right now, there are as many as 20,000 Russian troops, complete with tanks and artillery, positioned just to the east of Ukraine. But other units deeper inside Russia appear to be /
/
Fukushima Radioactive Cesium Reaches Canada
Scientists say that very little traces of toxic cesium-134 and cesium-137 from Fukushima nuclear power plant have been detected in Canada, Vancouver. “The detected concentrations are much lower than the Canadian safety limit for cesium levels in drinking water,” John Smith, a research scientist at Canada’s Bedford Institute of Oceanography in Dartmouth, Nova Scotia, said. Cesium-137
/
Dianne Feinstein pushes for semi-automatic rifle import ban based on 45-year-old law
California Democratic Sen. Dianne Feinstein is circulating a letter on Capitol Hill calling once again for a ban on semi-automatic rifles and asking for President Barack Obama to keep his State of the Union promise to make 2014 a “year of action.” Citing the Gun Control Act of 1968, Feinstein states, “In recent years… importers
/
Russia faces more sanctions, G8 suspended, Angela Merkel says
German Chancellor Angela Merkel says the European Union will impose more sanctions on Russia following its decision to annex Ukraine’s Crimean Peninsula and will suspend all G8 meetings until the political situation changes. Merkel told the country’s Parliament on Thursday ahead of an EU summit in Brussels that the bloc would expand a freeze of
/
Unidentified illness with symptoms similar to Ebola virus has killed 23 in Guinea
A mysterious illness has killed at least 23 people in southern Guinea in six weeks, but the disease has yet to be positively identified, the health ministry announced Thursday. “A feverish sickness whose first symptoms were observed on February 9 has claimed at least 23 lives, including that of the director of the Macenta district
/
Justices may decide if vendors can snub gay weddings
When Vanessa Willock wanted an Albuquerque photographer to shoot her same-sex commitment ceremony in 2006, she contacted Elane Photography. The response came as a shock: Co-owner Elaine Huguenin said she only worked “traditional weddings.” “Are you saying that your company does not offer your photography services to same-sex couples?” Willock asked by e-mail. “Yes, you
/
IRS watchdog warns of ‘largest scam of its kind’ with phone scheme
The Internal Revenue Service’s watchdog warned taxpayers Thursday about a sophisticated nationwide phone scheme that it said is “the largest scam of its kind” it has seen. The scheme involves callers claiming to represent the IRS and demanding immediate payments with a prepaid debit card or wire transfer, the watchdog said. Treasury Inspector General for
/
Attkisson: 'People Would Be Surprised At Level Of Cooperation Reporters Have With Politicians'...
/
NAVY TRACKS CIVILIAN TRAFFIC TICKETS...
/
Schumer: Senate has votes for media rules...

Venezuela Crisis & Communications
/
Three Earthquakes Recorded in Oklahoma Today
/
This was a really good read from Holly Deyo - Why We Live in Colorado – You Asked, Here's the Mystical Answer
/
Hobby Lobby Gets Day in Supreme Court: ObamaCare-Mandate Arguments to Decide Whether People Must Violate Religious Faith
/
Israeli Warplanes Strike Syrian Military Positions
/
City Threatens to Fine Woman for Posting Missing Dog Fliers
/
:Steve and 'V will be guesting for a very special program on the Hagmann Hagmann Report on MONDAY, March 24, 2014 from 8:00 p.m. to 11:00 p.m. Eastern Time;Title: Ukriane: Where The Dollar Goes To Die.
/
Evolution of Police State (Then & Now) 2014

/
Get Your Bibles Out,' Military Tells Gideons Volunteers
/ 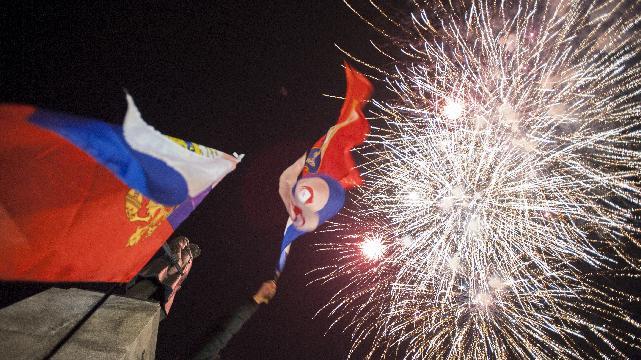 Putin Orders fireworks over Moscow as he laughs off sanctions...


Could USA Face Cruise Missile Threat from Gulf of Mexico?
/
Maguire - An LBMA Default Was Delayed, But It’s Coming
/

According to the legislation, it will:


"Protect Idaho law enforcement officers from being directed, through federal executive orders, agency orders, statutes, laws, rules, or regulations enacted or promulgated on or after the effective date of this act, to violate their oath of office and Idaho citizens' rights under Section 11, Article I, of the Constitution of the State of Idaho."


It also criminalizes any action by employees of the state that violate the legislation: Take These Steps Today To Survive An International Crisis
/
Vladimir Putin Vows to Defend Christianity Worldwide
The representative of the Russian Orthodox Church has told Russian Prime Minister Vladimir Putin this week of the urgent situation Christians are facing around the world in persecution hot spots, and has asked him to use his power to aid their situations. RT online reported that Metropolitan Hilarion, foreign relation chief of the Russian Orthodox
---Crimea crisis: Nato commander calls for allies to mobilise after Russia prepares ‘incredible force’ on Ukrainian border
Nato’s top military commander has warned that Russia is building an “incredible force” on its border with Ukraine, and said the time has come for Western allies to move its own troops to the east. There are growing fears that President Vladimir Putin may be preparing to follow up the annexation of Crimea with a
/

Fake US ship spotted in Gulf is a movie set, Iranian media say A replica of a US aircraft carrier spotted near the coast of Iran is nothing more sinister than a movie set, Iranian media said on Sunday. The New York Times, quoting US intelligence, said last week that the Iranians were building a mock-up of a US nuclear-powered aircraft carrier, possibly so they could then blow it up
/
Was this man killed by cops because he camped in the wrong spot?
Questions abound after the Albuquerque Police Department released video footage of cops shooting and killing a homeless man whose alleged crime was camping in an unauthorized area. The man, 38-year-old James Boyd, appeared to be complying with police demands to exit the area when they fired a flash grenade at him, beginning a chain of

/
New outbreak of deadly flesh-eating Ebola virus has already killed at least 59 people in Guinea, according to Unicef
At least 59 people have died in Guinea following the outbreak of deadly flesh-eating virus Ebola. The first cases of the haemorrhagic fever were spotted late last month. With no known cure or vaccine, health ministers have warned people to stay inside while they try to stop it spreading. Symptoms include internal and external bleeding,
/

5.2 Earthquake Registered North of L.A. then Deleted from USGS Website Did a computer glitch send out the wrong information about an earthquake in the Mojave Desert outside of Los Angeles? That may be the case. It all started when the U.S. Geological Survey website registered a 5.2-magnitude earthquake in the Mojave Desert just before 6 p.m. Friday. The 10News team quickly sent out alerts to
/
NATO general warns of further Russian conquest...
Moscow seizes more bases in Crimea...
Ukriane president orders troop withdrawal...
Air Force Commander Abducted...
Obama aide: 'Possible' Russia could enter Ukraine...
Romney slams president for 'faulty judgment'...
'Our esteem has fallen'...
BAKER: 3 Presidents and Riddle Named Putin...
UKRAINE FEARS NEW ATTACK
/
Jimmy Carter: 'My own communications are probably monitored'... Smashed: A mudslide carried a house with people inside across a road in rural Snohomish County on Saturday


Desperate families wait for news as workers continuing to search the site of huge mudslide and 18 people remain unaccounted for including a woman with her infant granddaughter
/
For the First Time in History, Israel Suspiciously Closes All Embassies & Consulates World Wide!
/