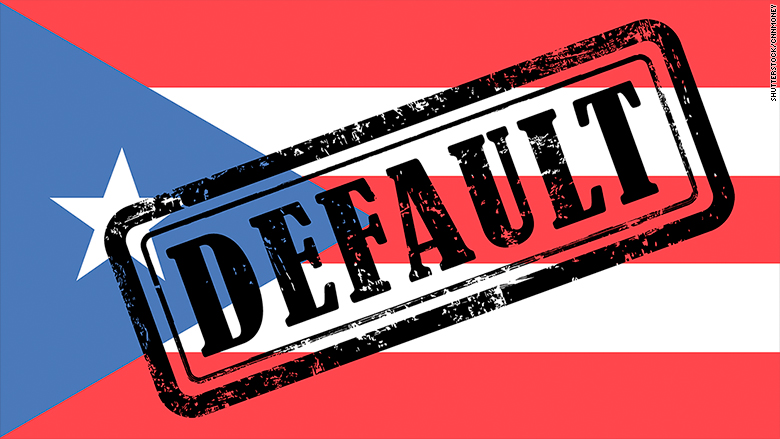 It is really telling how the markets reacted so violently to Brexit but pretty much ignored Puerto Rico's impending default. Brexit wasn't nearly as important to the overall global economy as a default from an American territory, in my mind.

While technically not in default as it merely declared a moratorium on debt repayment, Puerto Rico took a significant step towards a financial collapse of its economy despite President Obama's signing a law which sheltered the island territory from bondholder lawsuits. Just as with Brexit, Obama backed the wrong horse in the race and is left with egg on his face.

Puerto Rico has a constitution which specifically states the payment on its general bonds must be made before, BEFORE, it can address other obligations. Governor Alejandro Garcia Padilla stated the commonwealth's intention to disregard that provision--closely following Obama's lead in ignoring laws he doesn't agree with or allowing laws by states that contradict federal law.

The non-payment action will lead to the direct inclusion of U.S.-appointed overseers to "guide Puerto Rico through the crisis."

But, just like the Brits turned their back on the rest of the EU with their vote, there is a large question on how the rest of the states feel about the Puerto Rico situation. California, New York, Illinois and Michigan are the leading candidates to follow Puerto Rico's debt-default lead now. Can the country allow any other state to forfeit its bond obligations?

Congress has stated America has a financial obligation to support the territory. To some extent I agree. But I also view the island territory as our Greece. Until and unless the citizens there adjust their attitudes toward debt, take the responsibility for it and cut out the socialist malarkey, they will continue to be a growing shackle on the rest of the country.

Already more than half the island's 3.5 million residents live in poverty. That is a heavy burden to bear. But their insistence on entitlements from the government has taken the initiative from the populace. It is more difficult to work for something of value than it is to accept poverty without working for it.

The economy of Puerto Rico has shrunk consistently over the years. The government kept overspending its revenues and covered the budget shortfalls with paper debt. That again sounds like many of the states and really appears to be a mini-U.S. federal problem as well. Our politicians have gotten into the habit of buying votes by promising "someone else will pay" for this or that economic benefit.

While it works for a while, Puerto Rico is proof that it cannot last for very long. This is exactly why the Brits voted to leave the EU. They did not want the globalists to continue to reduce them into poverty by taking more than the Brits received in return and they wanted to at least go out as a nation not subjected to a globalist mindset. This is why every viable American state should look long and hard at the federal level tax system that is producing more red-ink, even while impoverishing the states themselves.

It is true our government gives back lots of things like highway funds, school funds, housing and other forms of assistance. But those all come at a higher cost from more regulation than the states labored under before the "federal money" came in. Before the Federal hand-out era, state governments were on a par with the federal government and each state had an economy that suited it best.

This was the system envisioned by the Founding Fathers, where the federal government was only to step in on "interstate commerce." Congress, aided and abetted by a politically- rather than Constitutionally-motivated Supreme Courts has infringed on that. Our state reps willing gave up their autonomous power in order to have other people's money to spend, not have to take it directly from their residents (avoiding the blame) and did not realize the strength of the shackles of regulation they were accepting.

Regulation has gotten so far out of hand since the Great Depression today we wake up and find the beast outweighs all other considerations before we can enjoy a single benefit provided by the cash provided by the federal government's rising debt load.

This is why the Founding Fathers advised against debt. A warning Puerto Ricans failed to heed as most of the other government entities also failed to do.

Debt is king, until you have too much of it. All the "growth" of the past nine years has been achieved by debt. Yet the markets also benefit from debt purchases so they turn a blind eye to the danger and, like the government ruling bodies, go merrily on their way as if all these government debt-sustained entities don't exist.

There is an elephant in the U.S. house, the 'fleabite' from an island territory with less than 1% of America's population and a miserly $13 billion due in bond payment.

"I have sworn on the altar of God eternal hostility to every form of tyranny over the mind of man."--Thomas Jefferson
Please note there will be no Rant on Monday due to the holiday. The Rant will be published next Tuesday, July 5. Enjoy the Fourth!--Mike