JAILED FOR NOT MARRYING THE GAYS! - HUCKABEE: 'Removes All Doubts About Criminalization Of Christianity'... / Colorado lawmaker tells anti-gay Christians: ‘Get thee to a nunnery’ / The Imprisonment of Christians Has Begun Judge Orders Clerk to Jail / FIRE FIGHTERS ENCOUNTER RUSSIAN TROOPS IN WOLVERINE FIRE AREA IN WASHINGTON STATE-FEARED FOR THEIR LIVES! / WI cop confronted by crowd, punched... - 'We need to start killing these officers'... / Police train for transgender interactions... / ◾'It's A Tipping Point' Marc Faber Warns 'There Are No Safe Assets Anymore' / Chinese Warships Came Within 12 Miles Of U.S. Coast / ◾Muslim Mob Attempts To Lynch Five American Students In Israel / Feds Say Company Discriminated Against Illegals, Orders Back Pay / 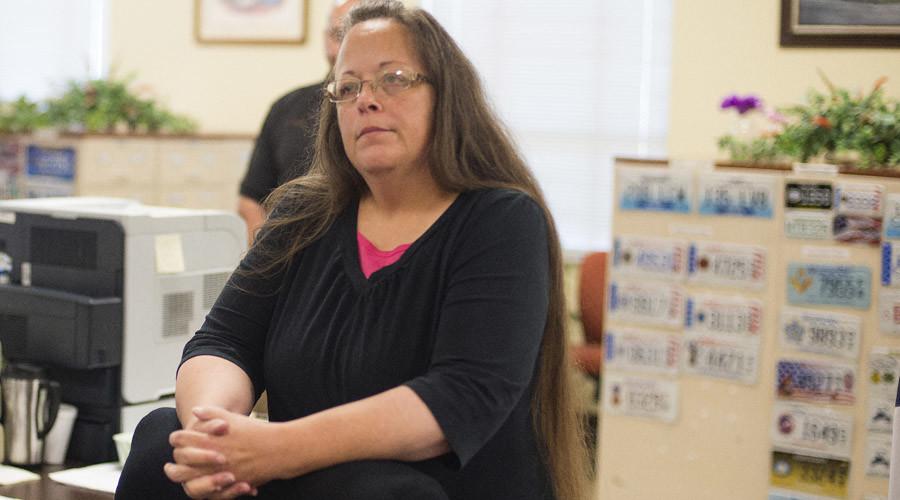 JAILED FOR NOT MARRYING THE GAYS!
Perp walk...
Hundreds yell, preach outside courthouse...

HUCKABEE: 'Removes All Doubts About Criminalization Of Christianity'...
/
12,000 troops, hundreds of tanks... and a missile that can destroy an AIRCRAFT CARRIER 'with one hit': China displays its ever-growing might to mark Japan's WWII defeat (but locals are banned from watching)
/
Colorado lawmaker tells anti-gay Christians: ‘Get thee to a nunnery’

/
The Imprisonment of Christians Has Begun Judge Orders Clerk to Jail

My son-in-law is a wild land firefighter based in Chelan, WA. As I’m sure you are aware the fires in Washington are some of the worst in the nation right now. I spoke with him last night after he came off of a 20 day shift. He has been battling the Wolverine fire which lies in a very remote part of the county only accessible by Boat or Helicopter. This is the same remote area that the U.S. Army Airborne division has been using to practice helicopter mountain training. (https://www.wenatcheeworld.com/news/2015/jul/06/army-considers-helicopter-training-in-ncw/) While battling the fire and establishing fie lines around Holden Village, he and his crew came upon two Blackhawk helicopters on the ground in a remote part of the forest. He said that soldiers drew their weapons on his US Forest service fire crew and told them they couldn’t be in the area because it was a restricted Military zone. He said all of the soldiers were in US Army uniforms, but two of them appeared to be Russian (wearing US Army uniforms) and in his opinion the Russian soldiers seemed to be in charge. My son-in-law challenged the soldiers stating they were there to save structures threatened by the fire and they would continue to do their job, at which point all the rifles in the company pointed at him. At this point he said he actually felt threatened for his life and he and his crew retreated going around the helicopter crew. This led to a discussion as to whether or not the US Army had been involved in possibly starting the fires which now burn approximately 135,000 acres.
/


Heavy activity on Russian
VLF comm channel. The movement involves a large signal intelligence/spy vessel of the Russians that has been
Tracked going up and down the east coast and in the carribean, and also a whole task force of
Chinese sailing now already getting close to Alaska. Then last night a statement by the RUSSIAN MILITARY
That they are preparing an answer to the US sanctions, and it will NOT be like them, but something
To make the US wish it had not done them. China does
Blame the US for the three big explosions and also does not like the threats of sanctions either for
The cyber stuff. So, the bear and the dragon are both very angry and may just decide to do something
About it all, maybe starting in Syria and then having in position a retaliatory strike near CONUS (THE US MAINLAND)

'We need to start killing these officers'...
/

Police train for transgender interactions...
/
'It's A Tipping Point' Marc Faber Warns 'There Are No Safe Assets Anymore'
/
Record 94 Million Americans Not In The Labor Force; Participation Rate Lowest Since 1977
/

Mathematician Looks to Bible to Predict Shemitah Market Trends One mathematician is looking to the Bible by using information gleaned about the Shemitah cycle to predict trends in international stock markets. Thomas Pound is an American educator and mathematician with a passion for statistical analysis in the financial arena. Several years ago, he corresponded with a financial advisor who was using a decennial analysis to
/

Russian Boots on the Ground in Syria? While the Obama administration continues to prevaricate over its strategy in Syria, it appears Russia is feeling rather less inhibited in its intervention. The Kremlin has been a staunch ally of the Assad regime since the Syrian uprising began in 2011, and has been very open in its support. Moscow has provided invaluable assistance against
/

The Justice Department says Nebraska Beef discriminated against illegal alien workers by asking them for proof of citizenship.
Feds Say Company Discriminated Against Illegals, Orders Back Pay
/
2015 Job Layoffs Up 31% Year Over Year in August Money Morning - After spiking to a four-year high in July amid massive military staff cuts, monthly job layoffs slipped by more than 60% in August. Still, the year-to-date count is up notably compared to August 2014… U.S. employers announced plans to trim headcount by 41,186 last month, according to a report Thursday from global outplacement consultancy Challenger, Gray & Christmas Inc. That was a 61% decline from the staggering 105,696 layoffs in July. The July tally was the highest since September 2011, when monthly job cuts hit 115,730.... The retail sector was hit hard job in August, with 9,601 planned layoffs reported during the month. Most of those were related to the bankruptcy of east coast supermarket chain A&P. The grocery retailer is shuttering more than 100 stores and laying off a reported 8,500 workers by Thanksgiving.
/
We've Run Out Of Buyers" - Half Of Homes In New York Are Now Losing Value
/
Pentagon Admits Russian Spy Ship Discovered Near US Submarine Base, Heading For Cuba
/