UH OH: Boehner says he'll get LOTS done in last month as speaker... / ◾More Reports Of Debtors Prisons Surface In Louisiana And New Hampshire / ◾More than 500K driver’s licenses issued to illegal immigrants in California / ◾Germany becomes Absurdistan. Chaos descends.:As a result, it seems that some 8000 people per day are now entering Europe via various routes. Most of these are young males between 17 and 25. The result is chaos as you can imagine / ◾Lethal Viruses Contaminating the US Blood Supply? / ◾The 'Hard-Landing' Has Arrived: Chinese Coal Company Fires 100,000:The global commodity collapse is finally starting to take its toll on what China truly cares about: the employment of the tens of millions of currently employed and soon to be unemployed / Europe: Seizing Homes to House Muslim Migrants / In New York, Pope Francis Embraced Chrislam And Laid A Foundation For A One World Religion / Putin: All countries should respect Ukraine’s sovereignty / US Futures Resume Tumble, Commodities Slide As Chinese "Hard-Landing" Fears Take Center Stage / Caterpillar Cutting Jobs / THOUSANDS Turn Out for Polish March Against Mass Invasion / Super typhoon" Dujuan has Taiwan in it's sites as thousands are evacuated /

http://overpassesforamerica.com/?p=16228
Germany becomes Absurdistan. Chaos descends.:As a result, it seems that some 8000 people per day are now entering Europe via various routes. Most of these are young males between 17 and 25. The result is chaos as you can imagine
/

Lethal Viruses Contaminating the US Blood Supply?
/
The 'Hard-Landing' Has Arrived: Chinese Coal Company Fires 100,000:The global commodity collapse is finally starting to take its toll on what China truly cares about: the employment of the tens of millions of currently employed and soon to be unemployed
/

Remarks made by Pope Francis at St. Patrick’s Cathedral in Manhattan have sparked a firestorm of criticism from those that do not believe that Christians and Muslims worship the same God.  Many have taken the Pope’s remarks as a major step in the direction of a one world religion, and the truth is that the Pope has made other such statements in the past.  In recent years, the theory that Christianity and Islam are just two distinct paths to God among many others has rapidly gained traction all over the planet.  Some religious leaders have even gone so far as to try to merge Islamic and Christian practices, and the term “Chrislam” is now often used to describe this ecumenical movement.  If all this sounds incredibly strange to you, just keep reading, because this is just the tip of the iceberg. (Read More...)
/
People All Over America Are Freaking Out About This ‘Super Blood Moon’

On Sunday night, we are going to see something take place that only happens four or five times a century.  A lunar eclipse is going to occur while the moon is making its closest approach to our planet.  When this happens, the moon will temporarily appear to be red as sunrises and sunsets all over the world are reflected off the surface of the moon.  This blood red “supermoon” has created apocalyptic fears all over the globe, and many people have stocked up on enormous amounts of food and supplies in anticipation of this event.  This particular blood moon is the fourth in a series of blood moons that have fallen on Biblical festival days in 2014 and 2015, and this one will be clearly visible from the city of Jerusalem.  Personally, I do not know if anything will or will not happen tonight or tomorrow.  I want to make that very clear. (Read More....)
/
Putin: All countries should respect Ukraine’s sovereignty RT - The sovereignty of all states, including Ukraine, should be respected, Russian President Vladimir Putin told CBS’s ‘60 Minutes,’ stressing that he knows “for sure” that the US was involved in the ouster of President Yanukovich in 2014. Speaking to veteran journalist Charlie Rose, Putin said that Russia respects the sovereignty of Ukraine, adding that “at no time in the past, now or in the future has or will Russia take any part in actions aimed at overthrowing the legitimate government.” He added that Moscow “would like other countries to respect the sovereignty of other states, including Ukraine. Respecting the sovereignty means preventing coups, unconstitutional actions and illegitimate overthrowing of the legitimate government.” It is “absolutely unacceptable” to address issues through unconstitutional means, he said referring to the coup in Ukraine in February 2014.
/
The UN Wants To Censor The Entire Internet To Save Feminists’ Feelings Breitbart - In a report released yesterday, entitled “Cyber Violence Against Women And Girls: A Global Wake-up Call,” UN Women, the group behind last year’s risible “He for She” campaign, called on governments to use their “licensing prerogative” to ensure that “telecoms and search engines” are only “allowed to connect with the public” if they “supervise content and its dissemination.” In other words, if search engines and ISPs don’t comply with a list of the UN’s censorship demands, the UN wants national governments to cut off their access to the public.
/
Parents Threatened with Arrest for Treating Daughter’s Epilepsy with Legal Cannabis Oil at School Free Thought Project - In a precedent-setting case, a state judge ruled this month that the mother of a New Jersey teenager with epilepsy, who is also her legal medical caregiver, cannot go to her school to administer her daughter’s cannabis oil. The oil treatments, which are legal in the state, control the young girl’s seizures and allow her to function normally in school, according to her parents.... In his 11-page ruling, the judge wrote that the family failed to show that their daughter would suffer “irreparable harm” if she were denied her medicine during the school day.
/
US Futures Resume Tumble, Commodities Slide As Chinese "Hard-Landing" Fears Take Center Stage Zero Hedge - It was all about China once again, where following a report of a historic layoff in which China's second biggest coal producer Longmay Group fired an unprecedented 100,000 or 40% of its workforce, overnight we got the latest industrial profits figure which plunging -8.8% Y/Y was the biggest drop since at least 2011, and which the National Bureau of Statistics attributed to exchange rate losses, weak stock markets, falling industrial goods prices as well as a bigger rise in costs than increases in revenue. In not so many words: a "hard-landing."
/

Another Truck Carrying Uranium Caught Fire at Honeywell Plant Daily Sheeple - You probably didn’t hear about this one in the national news... Last Sunday, a semi carrying uranium ore caught fire near the Honeywell Plant in Metropolis, Illinois. The fire began in the engine of the truck cab and was subsequently put out by the fire department. Officials stated that the truck was not at the facility itself and there was no immediate danger. The U.S. Nuclear Regulatory Commission has been notified.... According to one commenter who claims to live near the plant on one of the few local news outlets that even reported on the incident, this is the third “accident” of a similar nature regarding uranium in the past four months at this location alone.
/

Wisconsin Assembly Votes to Strip Planned Parenthood Funding The Wisconsin state assembly has passed a bill that would take away $3.5 million in federal funding for abortionist Planned Parenthood. The bill, which passed 60-35, has been hailed by Republican legislators as stopping money from going to abortionists while not limiting any access to birth control, cancer screenings and STD prevention and treatment. The
/
Caterpillar Cutting Jobs
Caterpillar, the construction and mining equipment maker has announced cutting 10,000 from 2016 to 2018. Most of the cuts will come by the end of this year. It has already reduced 31,000 jobs since 2012. Shares of Caterpillar dropped to a five year low. Other mining and energy companies that have also suffered, due to
/
Nothing's Safe" Passport's Burbank Warns "The Liquidity Of Everything Is Being Taken Down"
/

THOUSANDS Turn Out for Polish March Against Mass Invasion 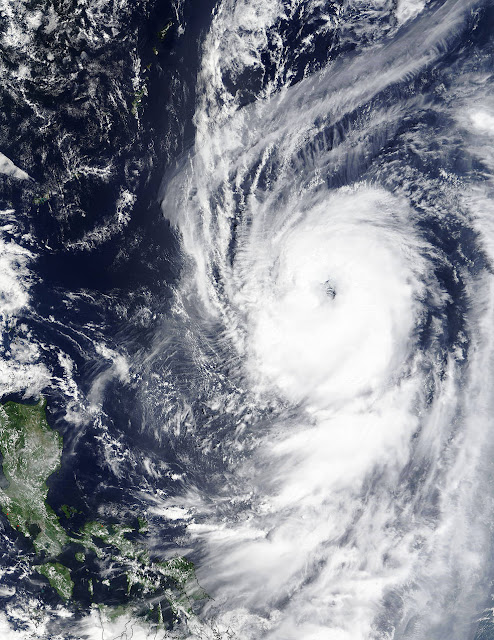 NASA's Terra satellite passed over Dujuan on Sept. 24 at 10:15 p.m. EDT and the MODIS instrument took a visible picture of the storm. Dujuan's eye had become visible from space. Credits: NASA Goddard MODIS Rapid Response Team
"Super typhoon" Dujuan was swirling towards Taiwan Monday with thousands of people evacuated from outlying islands as the storm gathered strength on its approach.

Satellite Loop of Typhoon Dujuan (Image/NOAA)Torrential rains and high winds are predicted across Taiwan from Monday afternoon as Dujuan nears the east coast, with landfall predicted around 11:00 pm (1500 GMT).
/