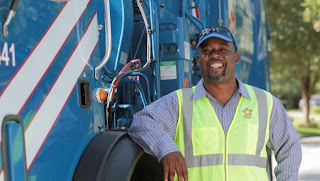 According to an article in Popular Mechanics dated November 2015 in a section called "Great Unknowns" a reader submitted this question...

"How many operating garbage trucks are there in the United States?"

"All things considered, we think a reasonable estimate would put the total number of garbage trucks somewhere within clattering-can-throwing distance of 2000,000. Sweet dreams."

Popular Mechanics admits they're using figures from 2001 and the number could be higher.

Doing the math if only half of the trucks (100K) use a single driver to save money that's a total of 100,000 garbage men. Which leaves us with 100K garbage trucks remaining. If you figure they use two people a driver and a loader, that adds up to 200K garbage men. This brings the total to roughly 300,000 spying garbage men!

Republic Services calls their garbage spying program "We're Looking Out for You" and claims it's a
crime prevention and safety enforcement initiative that enlists the active participation of Republic Services drivers, in cooperation with law enforcement and emergency services, to reduce crime and maintain neighborhood safety.  (Click here to view the Pdf)
MassPrivateI: Police/DHS are using 200,000 garbage trucks and possibly 300K people to spy on Americans
/

China’s Financial Desperation Evident in Central Bank Rate Cut China's central bank cut interest rates for the sixth time since November on Friday, and it again lowered the amount of cash that banks must hold as reserves in another attempt to jumpstart a slowing economy.
/

Patriotic Clothing Banned from Arizona High School Football Game Administrators at Corona del Sol High School in Tempe, Arizona, have issued a mandate to students about what they can and cannot wear to a football game against rival Marcos de Niza — wear what we approve of or you will not be admitted.

Overstock Holds 3 Months Of Food, $10 Million In Gold For Employees In Preparation For The Next Collapse

"What do we do as a business so that we would be prepared when the next crash happens. One thing that we do that is fairly unique: we have about $10 million in gold, mostly the small button-sized coins, that we keep outside of the banking system. We expect that when there is a financial crisis there will be a banking holiday. I don't know if it will be 2 days, or 2 weeks, or 2 months. We also happen to have three months of food supply for every employee that we can live on."
/
Russia Takes Over The Mid-East: Moscow Gets Green Light For Strikes In Iraq, Sets Up Alliance With Jordan
/
Google Freaks Out After Alex Jones Storms Headquarters

Pope Francis Has Catholic Church On Verge Of Civil War Over LGBT Inclusion
/
Dear Bureau of Labor Statistics: please pay careful attention to this case study of how your CPI "inflation" gauge, hedonically, seasonally-adjusted or otherwise, is completely inaccurate, and how what you record as 0% inflation is really 72%.
As Consumerist points out, for the latest example of "stealth inflation" we go to Sodastream, where as part of a redesign of its proprietary line of flavoring syrups which "cost the same" the actual bottle contents are now not only smaller but also diluted.


"How much smaller? The old version made 50 servings of flavored drink, and the new versions make only 29. Why 29? Why not 30? Such are the mysteries of the Grocery Shrink Ray."

Consumerist shows that "the new bottles are somehow taller even though they’re smaller. On the positive side, they no longer look like petite laundry detergent bottles."

Furthermore, while the number of servings is down to 2/3 of the original amount, the bottle size isn’t that much smaller. That’s because the measuring cap is now bigger, and each serving uses more syrup. "The worst part is that they just diluted it with more water so the ‘new improved’ ones LOOK like they are the same size," reader Erik complained to us. “They are 440ml instead of the old 500. EVIL! Free the bubbles! Stop this shrink ray occupation of my favorite soda!”

The old versions are still available on SodaStream’s site for now, as "Classics," but readers report that they only find the shrunken version in brick-and-mortar store.
Consumerist' conclusion: "maybe SodaStream made this change because they know that the product still looks reasonably priced next to its new competitor, the Keurig Kold. Maybe."
Actually, why SodeStream did this is irrelevant: we are confident the decision to shrink and dilute the product was the result of simple concerns about maximizing profit margins.
What is far more troubling is that for the Bureau of Labor Statistics, both the "old" and the "new" product costs the same, or $5.99, hence there is no inflation... until one does the actual math.
Presenting the "old", Dr. Pete soda mix, the one which is no longer available in bricks-and-mortar outlets, which costs $5.99 and which makes 50 servings per bottle.

And here is the new one: available everywhere for "the same price as the old one" but with one small difference - it makes only 29 servings per bottle.

The math:
Nominal inflation: 72.4%
Worse, there is not even an attempt to make the "new" product "hedonically" better, or for that matter different in any way - it is just smaller, and massively diluted.
And it just so happens that nobody in the Bureau of Labor Statistics noticed this oldest trick in the book, and why month after month the BLS reports core CPI that is negligible, and why said "lack of inflation" allows the Fed to continue its zero-interest rate policy for 7 consecutive years in a row.

/
Putin Warns The US Is Provoking A Global War
/

THE CHURCH HAS RENDERED TO CAESAR WHAT IS GOD’S
/
RUSSIAN SUBS STALK UNDERSEA CABLES...
ATTACK COULD HALT ALL COMMUNICATIONS TO USA...
/
1 in 3 students in LA schools are non-English speakers...

The William F. Buckley Jr. Program at Yale recently commissioned a survey from McLaughlin & Associates about attitudes towards free speech on campus. Some 800 students at a variety of colleges across the country were surveyed. The results, though not surprising, are nevertheless alarming. By a margin of 51 percent to 36 percent, students favor their school having speech codes to regulate speech for students and faculty.
/
HUCKABEE: GUN STORES SHOULD DISOBEY AN OBAMA EXECUTIVE ORDER 'The more that we surrender the Constitution... the more he keeps that going'
Posted by I at Sunday, October 25, 2015