Food Prices Soar as the Canadian Dollar Collapses / Citi On Why Negative Rates Are Like Potato Chips: "No One Can Have Just One" / Iowa meatpackers replaced American workers with foreign labor... / ◾Baltic Dry Index falls to 317, down 8 points.NOTE THE DROP IN THIS INDEX AND THE REPORTS, NOW COMING IN IN EMPTY STORE SHELVES FROM ALL ACROSS THE COUNTRY / Retail Apocalypse: 2016 Brings Empty Shelves And Store Closings All Across America / VIDEO: Oath Keeper Minstrel Jordan Page – Ballad of LaVoy Finicum (Cowboy’s Stand for Freedom) / Burns Oregon--LaVoy Finicum--Freedom’s Cry / Killing of an Oregon wildlife refuge occupier has re-energized protesters / Private companies are making huge profits from every part of our justice system / Rates Are "Screaming" That Investors Are In Panic Mode, Trader Warns

/
1 Dead, Others Injured In Shooting At Stock Show Complex
/
Citi On Why Negative Rates Are Like Potato Chips: "No One Can Have Just One"
/ 26 counties deemed 'sanctuaries' for illegal immigrants...
/
DHS 'Loses' Thousands Of Badges And Hundreds Of Guns And Cell Phones As Barack Obama Prepares To Visit A Mosque With Known Ties To Extremists - What's Wrong With This Picture?
/
Baltic Dry Index falls to 317, down 8 points.SQ. NOTE THE DROP IN THIS INDEX AND THE REPORTS, NOW COMING IN IN EMPTY STORE SHELVES FROM ALL ACROSS THE COUNTRY
---


FBI officials have established checkpoints around the Malheur National Wildlife Refuge as a handful of armed militants remain inside.
FBI Blocking Most Lines Of Communication, Militants Say Oregon Public Broadcasting - As the occupation of the Malheur National Wildlife Refuge enters its 30th day, it appears the FBI may be locking down lines of communication… David Fry, one of the four remaining militants, said the FBI made it so the occupiers can’t make outgoing calls on their cellphones. Fry said he can receive incoming calls, but that the other three in the refuge appear unable to receive calls on their cellphones. The militants also said they’ve lost access to the internet… Sean Anderson, another of the remaining militants inside the refuge, expressed frustration with the FBI’s barricade that is preventing media from getting into the refuge.
/
Killing of an Oregon wildlife refuge occupier has re-energized protesters
The Washington Post - Finicum’s killing has ­re-energized anti-government activists, even as the occupation at the nearby Malheur National Wildlife Refuge seemed to be running out of steam. Only four occupiers remained holed up at the refuge, while 11 others have been arrested. Their jailed leader, Ammon Bundy, who was arrested in the same operation in which Finicum was killed, has called for the three men and one woman at the refuge to go home peacefully. The FBI took the unusual step of releasing a video of Finicum’s shooting, and officials said it shows him reaching at least twice for a holstered handgun. But the video, taken from an FBI aircraft, has only added to the conviction of Finicum’s supporters that his killing was nothing less than an execution. “It was an assassination,” said Monte Siegner, 79, a Harney County resident who attended the protest and held a sign that read “Ambushed and assassinated.”
/ 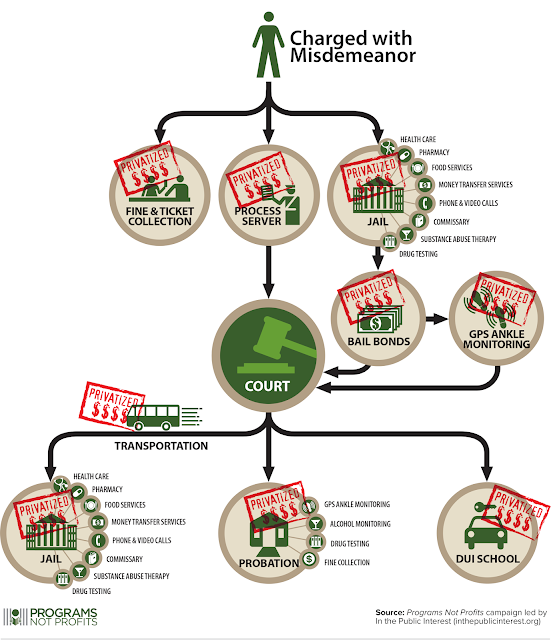 Private companies are making huge profits from every part of our justice system
/
Rates Are "Screaming" That Investors Are In Panic Mode, Trader Warns
/

/
Peter Schiff: Gold is Going to SKYROCKET- People Need to Prepare for That Now!
/
Europe’s biggest bank is imposing a global hiring and pay freeze in 2016
/
Emails prove Michigan governor knew about lead contamination of Flint water, but covered it up while children were poisoned
/
Posted by I at Monday, February 01, 2016